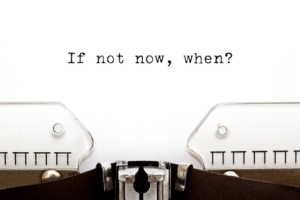 I like to talk about writing because I’m a writer. And if you ask me, I LOVE to talk about my books! Oh, I can tell you all about the half-dozens mostly-formed plots in my head, the interlocking trilogies, the fascinating characters, the wild plot twists – I can paint you vivid pictures that will have you begging me for more.

But the issue here is: it’s all in my head until I put it somewhere else. Like paper. Or a computer screen. And that’s where it’ll stay until I do some other things that result in it getting published, like endless queries and twitter conversations and ambushing editors at conventions and signing up for writer’s pitch conferences so I can pitch. Or I can jump through a thousand less hoops and self-publish, but I have to find a great cover artist, edit the everloving crap out of my work, get some beta readers, edit it again, ask an editor to edit, re-work and edit again, and then publish it.

Then I have to promote it, because while I do have some loyal and ardent readers, I don’t have great throngs of them as of yet. So I have to weigh which promotional activities are going give me the most bang for my buck and I have to blog and Facebook and Tweet and Tumblr and Instagram all that stuff.

But it all starts with one fundamental truth:

You have to write it first.

So the best piece of advice I’ve ever gotten came from just about everybody who ever wrote successfully, and there are too many to attribute this quote to, so I’ll just leave it as “Says Everyone Who Knows:”

Put some words down, and follow them with some more words, terrible words, dull words, and not the right words. Take your story in entirely the wrong direction and bore yourself to tears with it. Then go back in a few days or a week, and reread what you wrote with fresh eyes. Cut and slash and hack and rearrange and write between those lines and suddenly…it’s making sense. Not only is it making sense, sometimes, it’s just goddamn brilliant.

And then do all the other stuff to publish and sell your book, but none of that will happen without a finished product. None of it.

Then go back and rewrite it, because no matter how good an editor or proofreader you are (and I pride myself on both those things), your first draft isn’t good enough. It just isn’t. That’s the second piece of advice you’ll see from people who know.

And now, I can say I know, too. Just with not as much money in the bank as the other people who know.

2 comments on “My Favorite Piece Of Writing Advice”