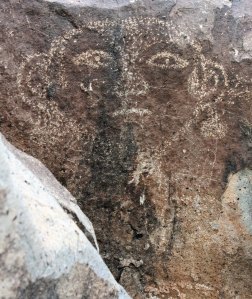 I’ve always said I could have been a cultural anthropologist.

Back in my married days, the ex was a huge history buff, and we cheerfully toured museums and battlefields galore. He was fascinated by the war stuff – strategy and armaments and logistics.

I couldn’t care less how they won the damn battle, or with what weaponry or how they compensated for weather or lack of tanks or ammo when planning an attack. But show me a display with a soldier’s diary, or a letter home, or a picture he carried in his wallet, and I’m immersed.

I grew up in the Southwest, near an area known as the Three Rivers Petroglyph site. The glyphs were carved into the rocks by Native Americans a thousand years ago, and my Dad used to take us hiking there. I’d spend hours running my fingers over the rocks, wondering about the man (or woman) who put the pictures there. What were their lives like? What made them laugh? What sort of sorrows had they lived through? Did they wonder about us as they sketched and etched?

So I guess you could say I people watch a lot. I love to take my laptop or a notebook out to Panera or Wegmans or even a local park and just make up stories about the people walking by. It’s a lot easier to bring characters and scenarios to life when they’re living and breathing in front of you, or you have something they left behind that lets you see into their lives.

I gather those little snippets and notes, and I keep them in a file so I can revisit them later – they help me when I’m having trouble “seeing” a character sometimes. I can refer back to that little girl I saw in the grocery store who was looking longingly at that ninja action figure, or the woman who was wiping her eyes after abruptly hanging up her phone, or the old man at the park, watching the kid with the kite with a half-smile on his face.

I’d love to say it’s just a writer trick of mine, but really, I’m just nosey. I want to know everything about everyone, even the ugly stuff. Stories are all around, and some of them….oh, some of them can change your whole point of view.