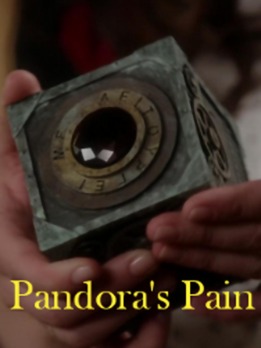 In my Once Upon A Time fanfic, Pandora’s Pain, the mythical woman comes to Storybrooke to retrieve her magical box, and her curse comes with her. Everyone in town is sent back to a terrible time in their lives, a time of misery and pain.

In this scene, Killian has just broken Emma out of jail, and they’ve hopped a train in an effort to get back to Storybrooke…

“How long have I been out?” Emma asked, stretching.

“A few hours,” Killian yawned. “It’s hard to tell in this bloody boxcar. Dark as a tomb in here.”

He wasn’t kidding. Emma reached out, feeling for his face.

“Sorry!” She gave a half-laugh. “I was just trying to find your face.”

“So you wear an eyepatch,” she said, stretching again. “You’ll fit right in with all the other pirates.”

She could just imagine that brow of his going up. “I’ve spent a lifetime standing out, Swan. Killian Jones doesn’t simply ‘blend in.'”

She felt her way down his face until her fingers reached his lips, then she brought her face up to kiss him.

And bonked foreheads with him instead.

“Sorry! God, I’m so sorry!” She was really laughing now, even though she felt terrible about hurting him. “Geez, it really is dark in here.”

He reached out carefully, guiding her back to lay against him. His hand moved slowly from her waist, trailing up along her side.

“You just need to be more careful, that’s all,” he said. His voice sounded husky in the darkness. “Feel your way,” he suggested.

His hand moved slowly from her ribs over to her arm, trailing up her neck to cup her face. He brushed his thumb slowly back and forth on her jaw, and she could feel his body shifting as he bent down. His breath feathered her lips, and she carefully – oh, so carefully – pushed up to meet him. He kissed her lingeringly, taking his time, then peppered her face and eyelids with smaller, softer kisses.

“There now,” he said. “Properly kissed.”

Emma tried to hold it back, but the yawn came out anyway.

“It’s still a long way from dawn,” Killian said. “And since my kisses are boring you, perhaps we’re better off getting some more sleep.”

Emma made a face, despite the fact that she knew he couldn’t see it. “Okay,” she agreed. “But lets stretch out this time. You’re a great pillow, but my back is killing me.”

She carefully moved off him, stretching out on her side and then reaching back for him to guide him in next to her. He came down behind her, sliding his arm around her.

“Ah. That is better. Leather gets so…bunchy.”

She was quiet for a long while, and Killian thought she might have fallen asleep, until her voice broke the silence.

He smiled against her hair. “That’s a relief.”

“Seriously. From the moment we met, you’ve never bored me.”

He raised up a bit, wishing he could see her face. “We’ve certainly never lacked for conversation,” he said. “And I could never be bored looking at you, love.”

“And for the record, your kisses aren’t boring either.”

“Well, at least you haven’t damaged my lips. Yet.”

She smacked at his hand, where it lay on her stomach. “Go to sleep, Killian.”

“You, too, love. We’re together again. Everything will come ’round.”

We’re together again, everything will come ’round. Emma smiled, knowing that somehow, he was right.

Pandora’s Pain can be read in its entirety at Fanfiction.net or at Archive Of Our Own (AO3).