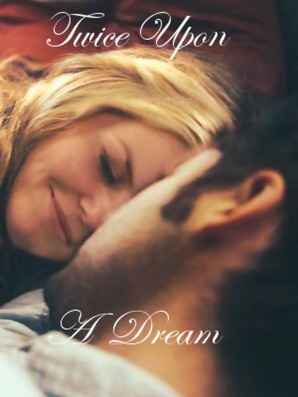 Twice Upon A Dream is the sequel to one of my most popular fics, These Dreams. Just as in the original story, Emma and Killian find themselves trapped in the Dreamscape, moving in and out of their own dreams and the dreams of everyone in Storybrooke. It’s one wild and occasionally poignant ride.

In this scene, Emma finds herself back in the Enchanted Forest, and face to face with a Killian Jones that might have been, if his life had worked out a little differently…

“Are you having a hard time deciding?” The woman asked.

Emma looked up from the two pieces of fabric in her hands, and tried to get her bearings. Her brain was still fuzzy and trying to pull itself out of the drug-induced stupor of her last location. She appeared to be in some sort of mercantile shop, and from the looks of the cobbled street outside and long, corseted dress of the woman speaking to her, she’d wager she was in the Enchanted Forest.

“If you’re thinking about a new dress, I’d go for the green,” the woman said. “That shade will do lovely things for your skin. Though I would imagine you could wear just about anything, a girl as pretty as you.”

Emma smiled. “Thanks.” She started to move away and ended up tripping over a basket on the floor of the shop instead, sending her flying right at the woman. She would have knocked her over, too, if not for the intervention of a uniformed man who’d just walked over.

“I’ve got you,” he said, catching her and putting out another steadying hand for the other woman. “Are you all right, Larice?”

Emma looked up to thank the man, and her words stopped in her throat.

“Are you all right, miss?” he asked kindly. “I didn’t mean to startle you.”

The man gave a short bow. “Admiral Liam Jones, and this is my wife, Larice.”

She couldn’t help the way her eyes swept the rest of the store before returning to the woman.

“Nice to meet you both,” she said. “I’m new in town. I apologize if I seem a little rattled.”

“It’s quite all right,” Larice said. “You must have forgotten you put your basket down.”

Emma nodded, then reached down and scooped up the scattered items off the floor and put them back in the basket.

“How clumsy of me,” she said, straightening back up. She very nearly lost the basket again when two young boys, who looked about four and six, came running into the store and barrelling into her.

“Edward! William!” Larice admonished. “Where is your uncle?”

Emma couldn’t help but smile. She’d heard that bellow directed at her a few times, after all. She turned and lost her breath in a rush at the sight of Killian in full dress uniform, and a pair of startled – but still lethal – blue eyes leveled right on her.

“Your pardon, my lady,” he said, tipping his tricorn hat. “I’ll see to it that these little ruffians give you a proper apology.”

He brought one hand down on each of the boys’ shoulders and they dutifully apologized before ducking under his arms and then running over to the counter to stare longingly at the jars of sweets lining the back wall.

Liam gestured to Emma. “Killian, this is Miss Swan.”

“A pleasure,” Killian replied, lifting her hand to his lips. “Captain Killian Jones, of his majesty’s navy.”

Emma remembered herself at the last second and dropped into a curtsy. “The pleasure is mine,” she murmured.

Larice caught Liam’s eye and raised her brows, not missing the interaction between her bachelor brother-in-law and this mysterious woman.

“Killian…Miss Swan is new in town, and I was just saying to Liam that we ought to have her to dinner this evening,” Larice said conversationally.

“You did?” Liam looked confused, but Larice tilted her head toward Killian, who still hadn’t stopped looking at Emma, and Liam finally caught her drift.

“Yes, yes, we had decided that, hadn’t we, dear?” He turned to Emma. “We’ll have you to dinner, and we won’t take no for an answer. Will we, Killian?”

There was no answer, as Killian hadn’t heard a word his brother had said.

“Killian?” Liam tried again, pursing his lips to keep from smiling too widely.

“I’d love that as well,” Killian agreed, nodding at his brother sheepishly. “And as you’re new to town, perhaps I can provide a guided tour in the hours until then, Miss Swan.”

He held her eyes again, and said her name like a caress. “Emma.”

“I’d love a tour.” She moved to put her basket over her arm, but Killian took it from her gently.

You can read the rest of their adventure, or any of the rest of my fics at Fanfiction.net or on Archive of Our Own (AO3).